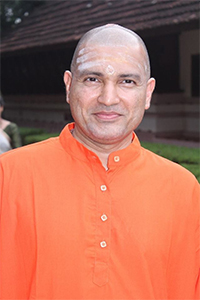 A precocious student who was born into a pious family, and spiritually inclined at a young age, Swami Bodhatmananda had the makings of becoming a dedicated Acharya of Vedanta early in life. From his earliest childhood, Swamiji was introduced to many saints and sages.

He was also initiated into performing pujas. His spiritual call came when he read Pujya Gurudev Swami Chinmayananda’s commentary on the Bhagavad Geeta  Not long thereafter, he decided to dedicate his life to the study of scriptures and the service of humanity. He served for five years at Chinmaya Mission Orlando (1996-2000) in various capacities and subsequently participated in the celebrations of the 50th anniversary of the founding of the Chinmaya Mission.

In 2002, he joined Sandeepany Sadhanalaya, the premier Institute of Vedantic Study, of the Chinmaya Mission in Mumbai where he studied Vedanta under the grace and guidance of Pujya Guruji Swami Tejomayananda and tutelage of Swami Ishwarananda.

In 2004, initiated as Br. Prabodh Chaitanya, he was appointed as Resident Acharya of Sandeepany San Jose, Chinmaya Mission San Jose (CMSJ). Since then, Swamiji has been conducting Discourses, Jnana Yagnas, Camps and Retreats, and Satsangs on Vedanta Texts in and around the San Francisco Bay Area and all over the United States, Canada, and India. Swamiji’s regular class schedule in San Jose consists of the study of the Upanishads, Bhagavad Geeta, and the Brahma Sutra. Swamiji’s systematic approach to teaching and imparting the knowledge of the scriptures has provided theoretical instruction along with practical guidance for seekers and has helped engender transformation in many of their lives.

On the auspicious morning of Govardhana Puja, the day after Deepavali, November 4, 2013, at the birthplace of Bhagavan Adi Shankara, Swamiji was initiated into the holy order of Sanyasa by Pujya Guruji Swami Tejomayananda, and was conferred the name Swami Bodhatmananda.

Swami Bodhatmananda is now the Resident Acharya of the 16th and 17th Residential Vedanta Courses at Sandeepany Sadhanalaya, Mumbai, India.

Cisco Webex is the platform of our choice for our online classes and meetings.