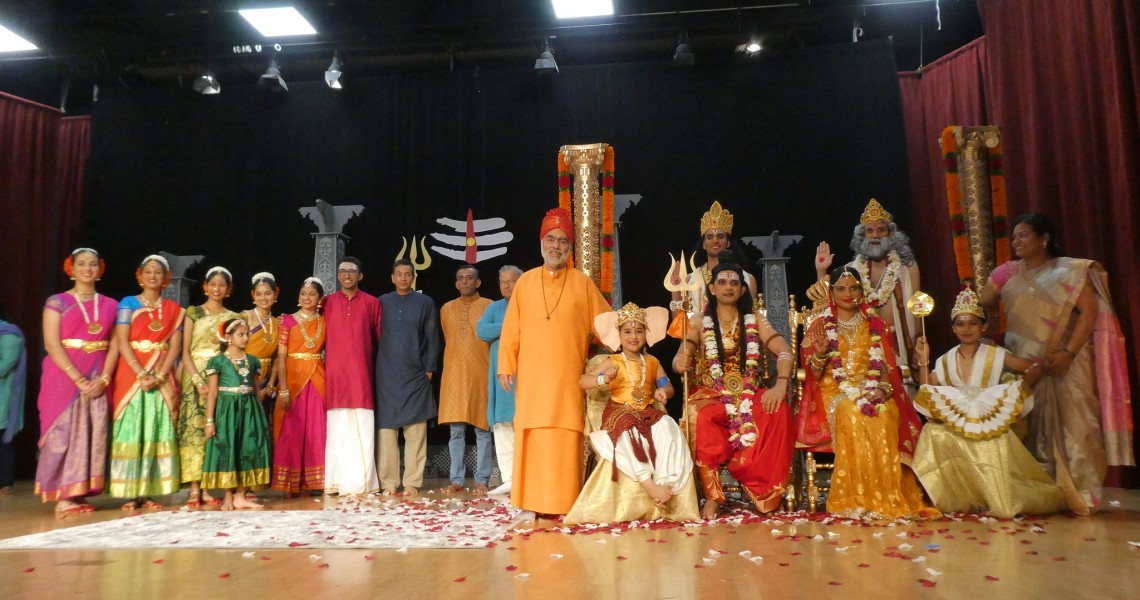 All the photos of the event can be seen in these sets:

A packed house was witness to the grand finale of the 5-day Shiva Vivah Yajna conducted by Swami Swaroopanandaji.

Swamiji explained the invocation shlokas of the Tulsi Ramayana that were chanted every day of the yajna. Swamiji emphasized that association with a great person causes us to be honored and respected regardless of our own qualities. Just as the crooked moon and snakes get worshipped due to their presence on Lord Shiva, so too we can gain respect and honor in the world if we are accepted by a Guru such as Pujya Gurudev Swami Chinmayananda.

The wedding was celebrated with pomp and splendor as befits the wedding of the Divine Mother and Father. The wedding was re-enacted in such a way that the audience felt as if they were present at the actual wedding of Lord Shiva and Goddess Parvati.

Swamiji provided some practical advice on marriage:
1. Even if you fight don’t carry it to the next day.
2. Love expresses only through service. Be humble to rule – as seen in the journey of a new bride to the one that rules the entire household.

Swamiji explained the purpose of marriage through the wedding song composed by Pujya Guruji Swami Tejomayananda. The real essence of a marriage is a spiritual journey. This is two-fold:
1. Reduce our likes and dislikes. This is only possible with Love
2. Serve the world and worship the Lord. Atithi devo bhava is the Dharma for householders

Swamiji mentioned that parents are supposed to provide an environment for children to become su-praja i.e. good members of society.

At the end, Swamiji asked all CMSJ members to do a daily sadhana of chanting ‘Om Namah Shivaya’ 108 times till the Mahasamadhi Aradhana Camp in 2020.

The audience left the yajna inspired, educated and entertained.

Swamiji picked up the story at the point that Parvati realizes her destiny in her birth was to marry Lord Shiva. Swamiji pointed out that Destiny is nothing but our own choices and actions based on those choices. Interpreting destiny is still up to us – whether we view it as a calamity or opportunity.

To attain Lord Shiva, Parvati then went to do tapas – austerity. She did more and more austere penances, eating leaves and ending up with not even eating leaves (hence her name Aparna).

After Sati’s death, Lord Shiva spent all His time in meditation. A demon Tarakasura had obtained a boon that only the son of Lord Shiva could kill him. All the Gods (Devas) therefore prayed fervently that Lord Shiva be remarried soon and have a son. Lord Rama appeared to Lord Shiva and instructed Him to get married to Parvati. Lord Shiva agreed – He called the saptarishis (7 sages) and asked them to test Parvati’s love for Him, and if she passed the test, to ask her father Himavan to take her home and wait.

The Saptarishis appeared before Parvati . Here Swamiji mentioned that a sure sign of our tapas being fulfilled is that we get darshan of saints (Sant Darshan). The Saptarishis tried their best to dissuade Parvati from being insistent on marrying Lord Shiva – including calling her mind stony since she was the daughter of a mountain, and proposing marriage with Lord Vishnu instead. But Parvati was resolute in her quest. The Saptarishis were delighted with her and told her her wish would be fulfilled.

Meanwhile, the Devas were worried that Lord Shiva was back in meditation. They sent Kamadeva, the God of Love, to disrupt Lord Shiva’s penance and to arouse desire in His mind. Lord Shiva opened his third eye (representing knowledge) and destroyed Kamadeva.

The Saptarishis met with Himavan instructing him to fetch Parvati from the forest and returned to Lord Shiva.

Then Lord Shiva proceeded with his retinue (Shiva Ganas) to get married. And what a spectacle it was! Swamiji regaled the audience with a detailed description of the makeup of Lord Shiva (snakes as ornaments everywhere!) and the members of his retinue. Literally this was the first-ever Halloween parade in the world – ghosts, goblins, skeletons!

The audience was then treated to a live re-enactment of Lord Shiva’s baraat. See the video above to get a sense of this unique baaraat.

Swamiji mentioned that examples abound in the scriptures of well-meaning spouses providing great advice only for their husband or wife who ignored it and came to ruin – Tara/Vali, Mandodari/Ravana and Lord Shiva/Sati to name a few.  Daksha’s story also teaches us that when we get drunk with power, even our immediate family suffers.

Sati was born in her next birth as Parvati, the daughter of Himavat (the King of the Himalayas) and Mena.The last thought or series of thoughts in a given birth determines our next birth. Sati gave up her body with an intense desire to be Lord Shiva’s consort in her next birth.

When a divine soul is born, material prosperity as well as spiritual masters arrive there. The Himalayas shone with both natural beauty as well as sages making it their abode. Swamiji made a point that divine souls are being born in the Bay Area – hence so many temples and new Chinmaya Bala Vihar locations!

Narada, the Divine Sage, visited the Himalayas. Himavat asked Narada-ji to foretell Parvati’s future. Narada-ji praised Parvati saying she was full of all virtues. However there were some defects in Parvati’s future husband. Swamiji had the audience roaring with laughter while reciting the list of defects – devoid of all virtues, no interest in anything, naked and homeless to name a few.

When asked if there was any positive outcome, Narada-ji mentioned that all these apparently negative qualities become positive when they adorn Lord Shiva just as even impure water is considered pure once it enters Ganga.. Swamiji gave a modern-day example of Marilyn Monroe -  a mole on her face became a ‘beauty spot’ and was considered fashionable.

This episode resulted in Parvati becoming firm in her determination to marry Lord Shiva.

Day 3 ended with a hilarious skit presented by Bay Area CHYKs (Chinmaya Yuva Kendra members) dramatizing this episode, the penance done by Parvati-ji as well as the destruction of Kama-dev by Lord Shiva.  See the video above.

Day 2
Swami Swaroopananda-ji narrated the story of Shiva and Sati, using that backdrop to provide practical tips for all of us in our worldly relationships.

After leaving Sage Agastya, Lord Shiva and Sati proceeded towards Kailash. At the same time, Lord Ram was in the forest grieving over Sita-ji’s kidnapping. Lord Shiva was torn between an urge to see Lord Ram in person versus not disturbing HIS divine leela in progress. Here Swamiji pointed out that true love is finding joys in the joys of the beloved, and not insisting that they conform to our expectations. The latter is dependence, not love.

Lord Shiva hailed Ram-ji as Sat-Chit-Ananda. This created doubt in Sati’s mind – how could an ordinary mortal grieving over separation from his wife deserve such praise ? Even Lord Shiva’s assurance was not enough for her to set aside her doubts. Swamiji pointed out that trust is a vital ingredient of all our relationships.

Sati then tested Lord Ram by appearing in the guise of Sita-ji. Much to her dismay, Ram-ji saw through her disguise. Rather than admit her error to Lord Shiva, she denied having done anything wrong. However, Lord Shiva could perceive what she had done. The lesson for us is that one lie can break trust in any relationship.

For a devotee of Lord Ram, Sita-ji is a mother figure. Lord Shiva could no longer treat Sati as a wife though He continued to treat her with respect, since she had assumed the form of His Mother. Sati-ji was looking for a way out of this predicament. And that arrived at a yagna conducted by her father Daksha. All other Gods were honored except for Lord Shiva. Sati could not bear this insult and kindled a yogic fire and gave up her body.

At the end of the talk we were treated to a Shiva-Tandava dance performance by Vinay Srinivasan. See video above.

See the video above for a quick recap of Day 1.

Swamiji provided an amazing introduction to the wedding cautioning us against just treating it as a story. It is rather a story with a lot of symbolism about Devotion, the essence of and the crux of a successful marriage. Marriage between Purusha & Prakriti (or Shiva and Shakti) is responsible for all of manifest Creation.

From the invocation in Ramcharitamanas, Goddess Parvati and Lord Shiva are compared with Shraddha (Belief) and Vishwas (Faith) respectively. While these two sound the same in English, they have different connotations: Shraddha – Female – Intellect – backed by Rational Thought. Belief in that which is experienced directly. Vishwas – Male – Mind – backed by Emotion. Faith in that which is not yet experienced. For spiritual seekers, Vishwas (Faith) is needed in (the as yet unperceived) God, and Shraddha (Belief) in the perceived Scriptures and Guru. Together they take us to the Highest. Only one without the other is like a bird with one strong wing. Swamiji pointed out that a bird with just one wing can only fly in circles! Both wings need to be strong to lift the seeker to the Supreme State of Bliss.

Our story begins with a dialogue between two Rishis: Bharadwaj Rishi asks Yajnavalkya to explain if the Rama that Lord Shiva worships and imparts to the dying soul in Kashi is the same as the prince of Ayodhya Rama whose exploits are well-known in the world. Yajnavalkya-ji replies that this is the same question as that posed by Goddess Parvati (in the form of Goddess Sati) to Lord Shiva.

Lord Shiva is the original author of Ramayana comprising 100 crore shlokas/verses. After distributing equally among men, gods (devas) and the underworld (rakshasas), only 1 verse was left. This was in Anushtup Chhanda – 32 letters. After distributing the letters equally, Lord Shiva retained only 2 letters for Himself – ‘Ra’ and ‘M’ – together constituting the very essence of Ramayana – ‘Ram’.

Yajnavalkya-ji then recounts the scene – once upon a time in Treta Yug, Lord Shiva and Goddess Sati went down to hear Ramayana discourses from Agastya Rishi. Though Lord Shiva is the original author of the Ramayana, He sat down as a mere student to listen to discourses from Agastya Rishi. This demonstrates His humility and eagerness for Satsang – He came from Kailash all the way to near modern-day Coimbatore! After enjoying the discourses, Lord Shiva treated Rishi Agastya to a treatise on devotion.

Please join us today (Sep 4th) for the next steps in this journey.

Back to Top
About Us