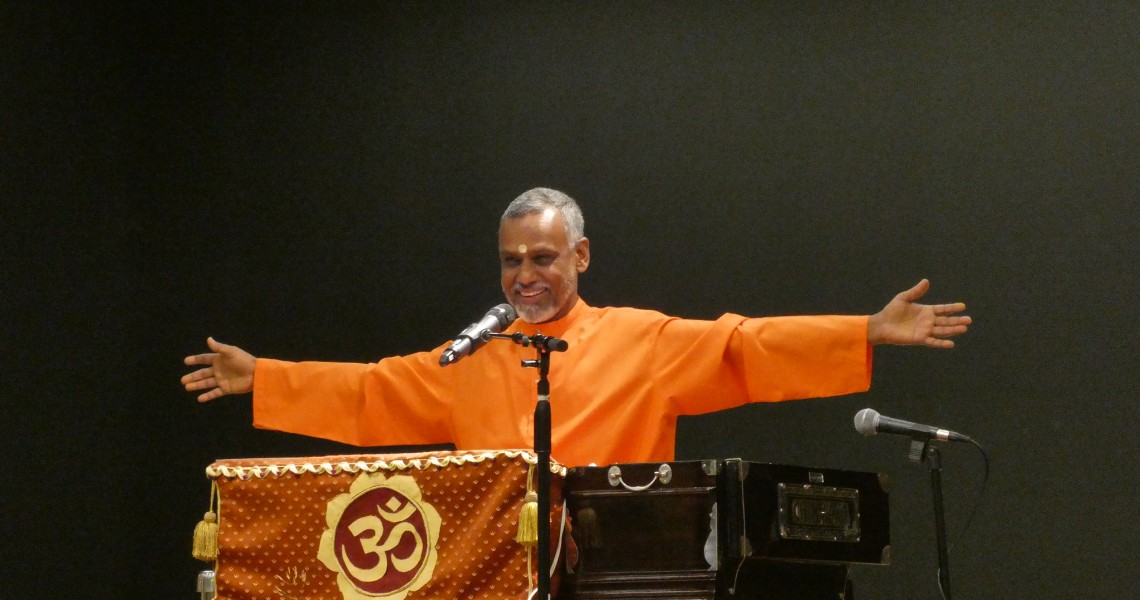 Swami Prakashananda from CM Trinidad and Tobago educated and delighted Chinmaya Mission devotees at San Jose during his Jnana Yagna on Sundara Kanda from Tulsidas’s Ramcharitamanas from March 1st to March 6th . Swamiji of course covered the well-known story of Hanumanji’s feats in the search for Sitaji as well as Vibhishana’s surrender to Lord Shree Rama. Along the way Swamiji pointed out several subtle points and provided practical tips for sadhakas.

All other chapters of the Ramayana are named after the location where most of the story takes place or the stage of Lord Shree Rama’s life. Why is this called Sundar (beautiful) ? These are some of the reasons Swamiji listed:

Swamiji covered the obstacles Hanumanji overcame on the way to Lanka and his response to them and drew a comparison to obstacles a Sadhaka faces:

Seeing Vibhishana’s house with auspicious marks and Tulsi trees, Hanumanji determines to meet Vibhishana believing that no harm can come from meeting a good person. The lesson to us is to allow for good to exist in a side dominated by evil. A Vibhishana could exist in Lanka! Vibhishana was very thrilled to see Hanumanji, who gave him encouragement that Lord Shree Rama would accept him as His devotee.

Hanumanji met both Lord Shree Rama and Vibhishan pretending to be a Brahmin, but came before Sitaji in his original form. The point is that none of our disguises and pretensions work before our mother!

Swamiji pointed out subtle points like Tulsidasji covering Hanumanji’s return journey in a half-line! This is because Hanumanji has now become kritakritya after meeting Sitaji. Nothing is impossible for a realized person once they see the One everywhere.

When the monkeys go back to Lord Shree Rama and HE showers Hanumanji with praise, Hanumanji clasps HIS feet asking to be saved. Saved from what ? the pride of ego. We are all seeking attention normally from the time of our birth. Swamiji mentioned that the vasanas of seeking name and fame are actually stronger with us than those of sense-pleasures.

After Hanumanji’s departure, Vibhishana speaks up in front of  Ravana asking him to return Sitaji and surrender to Lord Shree Rama. Of course Ravana was not willing to listen to this advice and literally kicked Vibhishana away.

It is the power of Satsang with Hanumanji that enabled Vibhishana to stand up to Ravana and leave him to go to Lord Shree Rama.

The last episode covered was the surrender of Vibhishana to Lord Shree Rama. Vibhishana is detained by the monkeys, and Sugreeva argues that he should be kept bound and in prison, but Lord Shree Rama says that He will protect the worst of sinners once they surrender to HIM.

Lord Shree Rama addresses Vibhishana as ‘Lankesh’ – before saying or asking anything else, HE already granted the kingship of Lanka.

Swamiji made a beautiful point here that Hinduism preaches the doctrine of Karma, but once we turn to the Lord completely, there are no sins left to be forgiven. Once we turn to the Sun, how can our face be in darkness ?

Swamiji concluded the Jnana Yagna on this wonderful note, leaving the audience mesmerized and hoping for a repeat visit soon.

All the photos of the event can be seen here: https://flic.kr/s/aHsmLRKRns

Back to Top
About Us

Cisco Webex is the platform of our choice for our online classes and meetings.